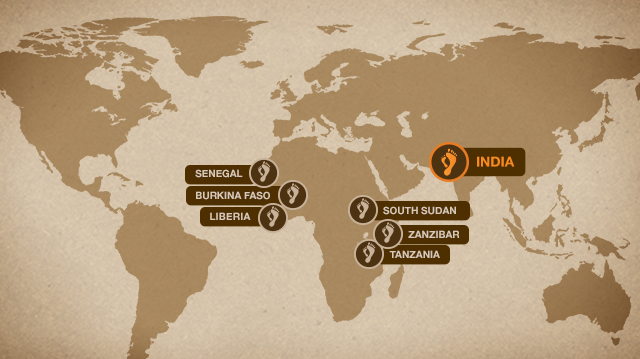 With the six new regional training centers, Barefoot College will rapidly multiply its training capacity and help bring reliable, clean energy to an estimated 24,000 households in Africa. Since 1989, Barefoot College’s solar electrification program has trained over 600 illiterate and semi-literate women as Barefoot Solar Engineers (BSE). Collectively, they have electrified 40,000 rural households in 1,265 villages in 64 countries across Latin and South America, Africa, the Middle East and Asia to cover 500,000 people.

For 40 years, Barefoot College has been innovating around the barriers impeding access to knowledge for the poorest and most marginalized rural poor. Recognizing that women are serious change agents and must be encouraged and empowered to take up their natural roles as environmental stewards and active participants in their own development. “By opening six training centers, we will train mature women to be capable and confident solar engineers to fill a basic and critical need for reliable energy in African villages. These Women Barefoot Solar Engineers of Africa will become competent, confident and able to scale technology themselves at to raise quality of life for all.” Said Bunker Roy, Founder and Director, Barefoot College.

Globally, 1.6 billion people do not have access to electricity and more than 75% of those people are located in rural areas and are often indigenous and tribal groups who are cut off from grid power. At the same time, women in every region suffer under the harshest conditions of poverty. They are unable to realize their full potential within their families and communities or play a substantial role in community decision-making; their ability to be effective environmental stewards is rarely developed.

Director of International Activities, Meagan Fallone says, “The Barefoot Approach is interested in helping to catalyze a rewriting of the South-South development narrative. One which first and foremost listens to the voice and input of the extraordinary rural women in the developing world. The “Big Idea” is decentralizing and demystifying access to knowledge that clears away barriers or prejudices around formal education and literacy.” The commitment offers a new opportunity for Barefoot College to influence national policy in countries outside of India, by working with national governments to craft budget allocations that support the scaling of decentralized, grassroots, community-managed green energy solutions. It also will support national governments in meeting UN Millennium Development Goals and the UN Energy for All initiative.

The funding for the base commitment, has been made possible by The Government of India. Additionally, each host government has signed an MOU committing substantial resources toward facilities, and Program running costs. The balance of funding will be sought through private sector partnerships and philanthropic engagement. The total estimated commitment will be an overall investment of $11.5M.

Visit the CGI website to read the full commitment to action and see the next steps in Barefoot College’s international expansion.

About the Clinton Global Initiative (CGI)? Established in 2005 by President Bill Clinton, the Clinton Global Initiative (CGI)—an initiative of the Bill, Hillary & Chelsea Clinton Foundation—convenes global leaders to create and implement innovative solutions to the world’s most pressing challenges. CGI Annual Meetings have brought together more than 180 heads of state, 20 Nobel Prize laureates, and hundreds of leading CEOs, heads of foundations and NGOs, major philanthropists, and members of the media. To date, members of the CGI community have made more than 2,800 commitments, which are already improving the lives of more than 430 million people in over 180 countries. When fully funded and implemented, these commitments will be valued at $103 billion.??CGI also convenes CGI America, a meeting focused on collaborative solutions to economic recovery in the United States, and CGI University (CGI U), which brings together undergraduate and graduate students to address pressing challenges in their community or around the world.For more information, visit clintonglobalinitiative.org.