An Open Letter to the Occupy Movement

Crossposted on Tikkun Daily. by Starhawk, Lisa Fithian, and Lauren Ross (from the Alliance of Community Trainers) 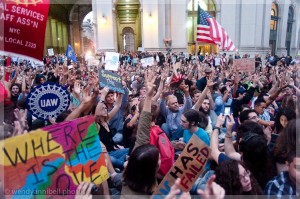 The Occupy movement has had enormous successes in the short time since September when activists took over a square near Wall Street. It has attracted hundreds of thousands of active participants, spawned occupations in cities and towns all over North America, changed the national dialogue and garnered enormous public support. It's even, on occasion, gotten good press! Now we are wrestling with the question that arises again and again in movements for social justice - how to struggle. Do we embrace nonviolence, or a 'diversity of tactics?' If we are a nonviolent movement, how do we define nonviolence? Is breaking a window violent? We write as a trainers' collective with decades of experience, from the anti-Vietnam protests of the sixties through the strictly nonviolent antinuclear blockades of the seventies, in feminist, environmental and anti-intervention movements and the global justice mobilizations of the late '90s and early '00s. We embrace many labels, including feminist, anti-racist, eco-feminist and anarchist. We have many times stood shoulder to shoulder with black blocs in the face of the riot cops, and we've been tear-gassed, stun-gunned, pepper sprayed, clubbed, and arrested. While we've participated in many actions organized with a diversity of tactics, we do not believe that framework is workable for the Occupy Movement. Setting aside questions of morality or definitions of 'violence' and 'nonviolence' - for no two people define 'violence' in the same way - we ask the question:

What framework can we organize in that will build on our strengths, allow us to grow, embrace a wide diversity of participants, and make a powerful impact on the world?